She came for a revival on March 22, 1925. After the series of meetings, she was asked to remain permanently. Now one year has passed. Alliance tabernacle has been dedicated. The auditorium has a seating capacity of 4,500. The building is said to have the best acoustics of any structure in the south.

The "power behind the throne"—Mrs. Virginia Brandt Berg—is the daughter of the Rev. John L. Brandt, preacher, author, and lecturer of Muskogee, Okla. She comes from a family of preachers, and is rearing another family of preachers. Mrs. Berg is the mother of two boys and one girl.

The older boy is already studying in the Alliance Bible college at Toccoa Falls, Ga. Little David has preached at the tabernacle several times, and will enter the ministry as soon as he is old enough. The girl will follow in her mother's footsteps.

She married the Rev. H. E. Berg, who was active in the work of the Christian Church in Texas and Oklahoma. Then the case of Paul and Barnabas was repeated. Mr. Berg stepped back and let Mrs. Berg do the preaching. Now she is pastor, and Mr. Berg is her associate and director of Bible study.

A crowd of 3,000 hushed persons sits in a vast, wooden auditorium, eyes glued on the figure of an earnest faced woman on a raised platform.

With a dying rustle of musical scores and instruments, an orchestra at her side composes itself to hear and not be heard.

A discreet cough is stifled as the woman on the platform raises her hand:

"The title of my sermon tonight will be 'From Deathbed to Pulpit.'"

Older members of the church never tire of hearing it; new members come by the hundred to hear this exposition on the faith of a woman in the healing power of the Lord—a faith which often packs her tabernacle seating some 7,000, with followers. "Though not affiliated with any other church in the country, the tabernacle follows the religious principles of the Christian Missionary Alliance.

Virginia Brandt Berg who was unable to pay her scheduled visit to Homestead last week will speak in the auditorium of the Neva King Cooper School next Thursday evening at 8 o’clock, according to an announcement made Wednesday. There is no admission charge.

Mrs. Berg, pastor of the Church of the Open Door in Miami is heard each Sunday over WQAM in “Meditation Moments.”

Virginia Brandt Berg, pastor of the Church of the Open Door in Miami, who has been heard in “Meditation Moments” over WQAM every Sunday morning for several years will be heard in Homestead at 8 p.m. Thursday Jan. 24 in the Neva King Cooper School auditorium. Her subject will be “How God Answered Prayer or From Deathbed to Pulpit Overnight.”

Mrs. Berg is said to be one of the outstanding woman orators of America. Her father’s name appears in “Who’s Who in America” as a Chautauqua lecturer and author of several books.

In the lecture to be heard here she will narrate several episodes in her life story, including her loss of faith in Christianity, her recovery of it again after five years of invalidism from a broken back suffered in an accident, and her call to preach.

Her appeal is said to be to all denominations and to all classes of people. She will speak one night only. There will be no admission charge or free-will offering.

Beginning tomorrow night at 7:30, and continuing every night except Tuesdays, the Berg Evangelistic Party of Los Angeles, California, will be conducting a series of revival meetings at the Girty Grange Hall in Girty for one or two weeks.

Evangelist Virginia Brandt Berg, formerly of Miami, Florida, and well known in this area for her revivals in Indiana and elsewhere in Western Pennsylvania, will be the principal speaker.

She is the author of the widely published books, "The Hem of His Garment" and "Streams that Never Run Dry." and is considered one of the nation's leading exponents of the life of faith.

She was a blatant atheist and helpless invalid when remarkably restored to faith and health in answer to prayer.

Her voice is also well-known to radio listeners of the Tri-State area through her frequent broadcasts on the "Bit of Heaven Hour", WWYA, Dr. Jack Munyon's "Lest We Forget" Broadcast, WWSW, and her own "Meditation Moments", 'WQAM. She has many friends in the Indiana area.

Accompanying Mrs. Berg are her husband, the Rev. H. E. Berg, Bible Teacher, and her son, the Rev. David Brandt Berg, singer and pictorial Bible lecturer, who will be presenting vividly illustrated lectures on scientific and prophetic themes during the series, as well as beautifully pictorialized songs.

Police today sought an unidentified man as the person who threw a coral rock thru the window of the ante-room of the Christian Missionary Alliance tabernacle here last night and struck Mrs. Virginia Brandt Berg, 53, just before she started to conduct her nightly services.

The woman evangelist was knocked unconscious but recovered and called members of the congregation. Police said a trap was laid to kidnap her last Thursday and that she had received letters threatening that unless she closed her meetings at once she would meet a fate more serious than "another well-known evangelist of the same faith experienced." 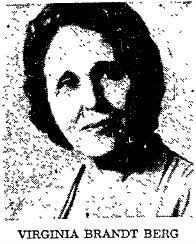 Throughout next week, the Berg Evangelistic Party of Miami, Fla., will present an unique program each night except Saturday at the Alliance Church, Ninth and C Sts., Sparks.

Each evening service includes a motion picture at 7:15, a study of the Bible in pictures at 7:30, and a musical program at 7:45. Director will be the Rev. David Brandt Berg, and the principal message at 8:15 will be presented by Mrs. Virginia Brandt Berg, evangelist.

Tomorrow morning at the regular Sunday school meeting, 9:45, Mrs. Berg will present "History and Martyrs of the Church," illustrated with pictures. At 11 o'clock, she will speak on "America's National Cancer." "A World Missionary Tour" in motion pictures and color pictures will be shown at the 6:45 Young People's service, and at 8 o'clock Mrs. Berg will give her life story of conversion.

Monday night Mrs. Berg will speak on "The Pot of Gold at the End of the Rainbow," and will present a souvenir to all who attend. Tuesday night, special motion pictures of the Miami hurricane will illustrate her message, "An Old Broken Prayer Line." Wednesday she will speak on "Why Does God Allow Suffering."

Thursday she will discuss "Palestine in Bible Phophecy, Past, Present and Future," which will be illustrated with color pictures and a sound film. "World Leaders" will also feature a special motion picture in Friday night's program.

The Girty Grange Hall is one mile north of Route 156, about 3 miles east of Spring Church. 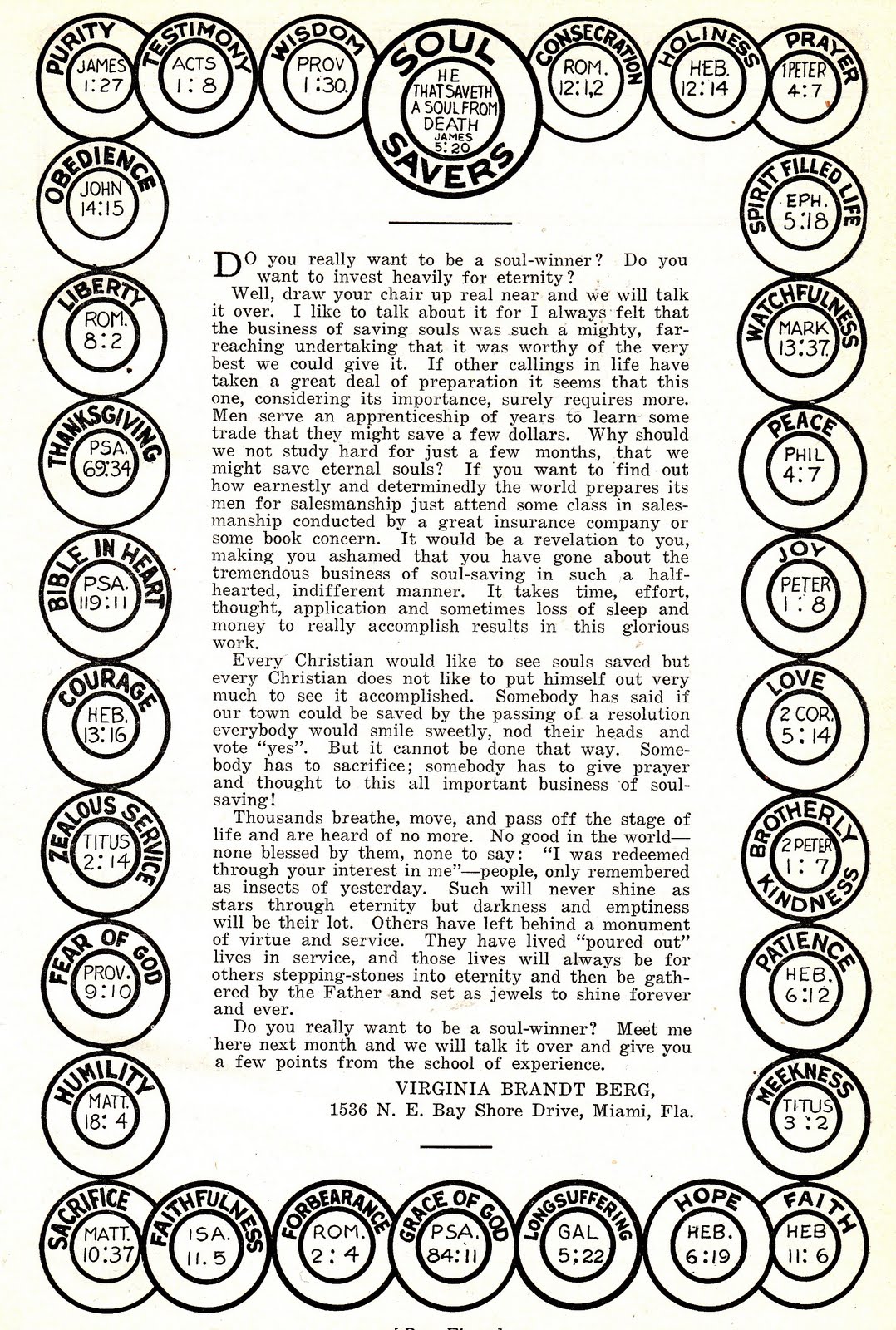 Mrs. Virginia Brandt Berg, pastor of Christian Missionary Alliance tabernacle and one of the dynamic speakers in the South, will deliver the address of the ...